Amidst a several-month-long saga of antics and odd behavior, it’s time to evaluate whether Antonio Brown really wants to play football at all – and if he’s finally crossed the line from playful bad guy to villain. 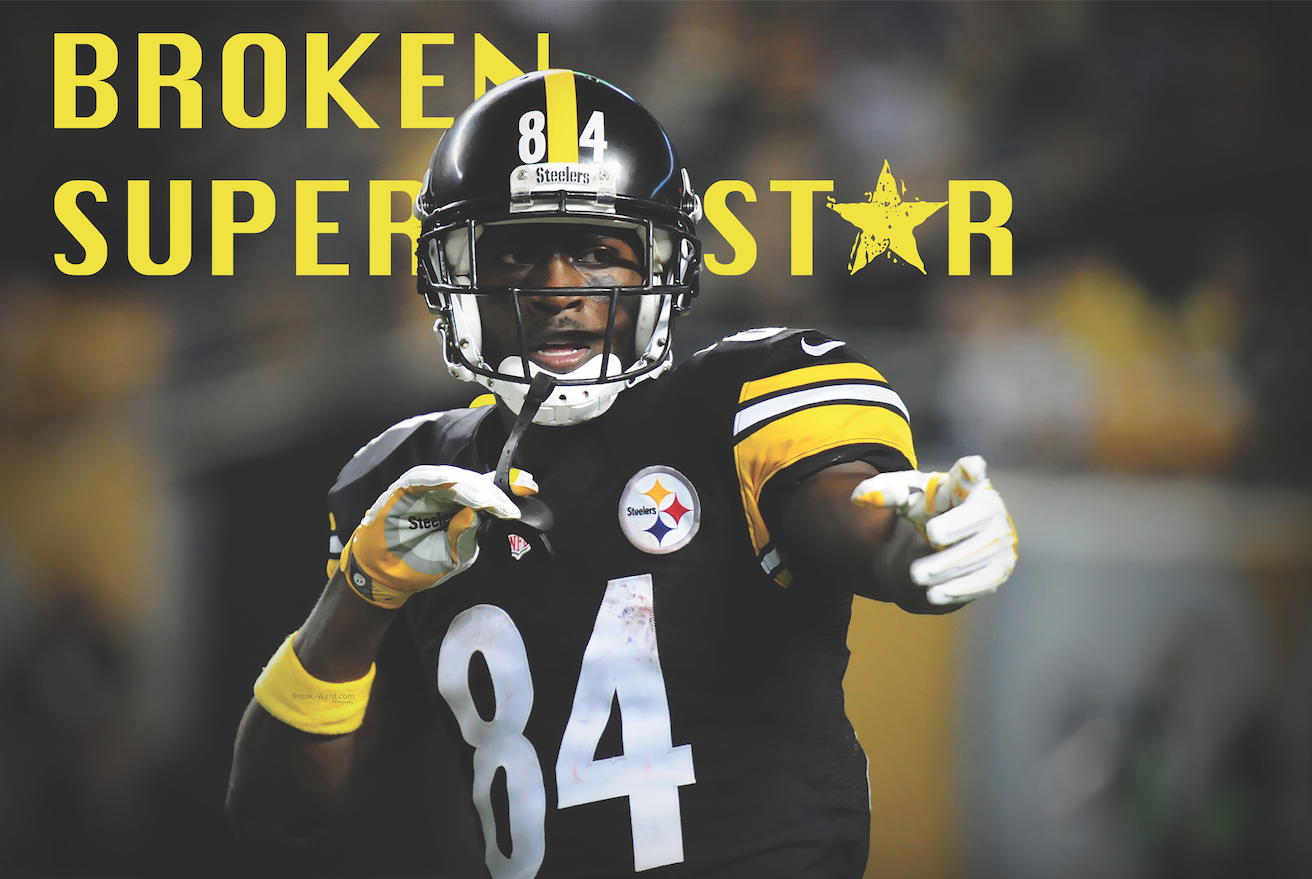 When Antonio Brown went on live TV to show off the damage from his cryotherapy-session-from-hell – his feet were blistered, peeling and frostbitten, an utterly unappealing sight for unsuspecting HBO viewers — it would have been fair to assume that that would have been the lowlight of his month.

Nobody could have predicted what followed.

Threatening retirement over a helmet intended to protect his own brain, airing grievances about his fines to Instagram, threatening to hit his GM, leaking unauthorized recordings of a phone call with Jon Gruden. And now, finally, Brown’s whirlwind summer will conclude with sexual assault allegations from two separate women.

Of all the NFL players who have demonstrated an inability to coexist with basic management, Antonio Brown is by far the most controversial.

His inability to work with his teammates, combined with his off-the-field issues, have transformed him from a franchise player into a volatile wide receiver with an attitude problem.

The downfall of his once-promising career began during a seemingly normal Week 4 match-up with the Ravens, when he broke wide open for what should’ve been a huge play. Instead, his then-quarterback Ben Roethlisberger threw the ball out of bounds, leading to a 4th down punt. Brown proceeded to throw a temper tantrum on the sideline, throwing a water cooler and showing clear signs of frustration.

What could have been a passing incident for any other QB-WR pairing — and oftentimes is, in the NFL, with missed connections often as common as successful ones — became a year-long melodrama for the Steelers.

The year came and went, with Roethlisberger publicly calling out Brown on his radio talk show throughout the season. With the season ending in a disappointing loss to the Jaguars in the AFC Divisional round, the new focus of the team shifted to the resigning of star running back Le’veon Bell, with Brown’s drama forgotten for the time being.

Bell eventually chose to sit out the season rather than play under a franchise tag, putting even more pressure on the Steelers to win, and win quickly. More pressure led to more problems on and off the field for Brown, who in Week 2 tweeted: “Trade me let’s find out” in response to a tweet saying that his success was entirely due to Roethlisberger being his quarterback. The rest of 2018 led to legal issues for Brown, who was taken to court twice in as many months for throwing furniture off his 14 story apartment and almost injuring a 22 month old toddler, as well as a reckless driving case in which he didn’t show up to his court date and was fined over $400.

As things went from bad to worse for Brown, the Steelers followed suit. They lost four of five games from Weeks 11 to 16, setting the stage for a Week 17 must-win game against the Cincinnati Bengals. On the Wednesday before their biggest game of the season, Roethlisberger called out Brown in practice, resulting in him storming off the field and not practicing for the rest of the week.

Incredibly, Brown showed up to the stadium expecting to play, and when he was told he couldn’t, he left the game before halftime. The Steelers lost that game, didn’t make the playoffs, and Brown made it clear that his time in black and yellow had come to an end.

His off the field issues hadn’t changed, however, as in January he was accused of domestic violence against the mother of his child. The NFL claimed to have looked into this incident, but didn’t reprimand him for it. This began a trend of the league disregarding his actions, which would continue later in his career.

It became publicly known that Brown wanted out of Pittsburgh, and on March 13, Brown was traded to the Raiders for 3rd and 5th round picks. He would be in silver and black: a lauded member of Raider nation. His offseason seemingly went off without a hitch, and he reported to camp on July 25.

However, when he joined team camp, his feet appeared to be in terrible condition. His skin was peeling and he could not run without feeling pain. The trainers came to realize that Brown had suffered from severe frostbite, due to his lack of appropriate footwear while performing cryotherapy, where athletes enter chambers approaching -100 degrees Celsius in order to rapidly heal small injuries. At around the same time, he was sued by his personal chef for allegedly failing to pay her $38,000 in wages.

In late July he left practice early, stating that he was searching for a treatment for his feet and protesting the NFL’s ruling that prohibited Brown from using the helmet he had been using since he entered the league in 2010.

The helmet issue was particularly convoluted — in a modern NFL, where CTE is at the forefront of both fans’ and players’ minds, more protective helmets shouldn’t have been a controversial implementation. It’s a change supporters of the league have been requesting for years, and which was quickly adopted by the likes of even those players most used to outdated helmet models like Patriots long-time quarterback Tom Brady. Yet Brown threatened legal action against the NFL if he was forced to wear the protective headgear, claiming it interfered with his vision and mobility and damaging his performance.

Was that claim fair? Sure, and football players, just like any of us, are creatures of habit. Change is uncomfortable. But Brown’s helmet fiasco was indicative of an altogether more troubling notion that the Raiders refused to come to terms with: Antonio Brown does not need football.

It’s something he’s told us — and the Steelers — a number of times. Back in March, during his tumultuous tenure with the Steelers, he said it plainly: “I don’t even have to play football if I don’t want. I don’t even need the game. If they wanna play, they going to play by my rules. If not, I don’t need to play.”

It’s Brown’s way or the highway. Maybe it always has been. Maybe the Raiders were willing to take that gamble, trust that his statements were nothing more than an anger-fueled rant against a team who he’d been begging to be traded from. The Patriots will take that gamble anew, trusting that Bill Belichick and Brady will be enough of a force to tame Brown. But the saga he headed this time, a full seven months removed from his previous comments, has again culminated at a single conclusion: maybe Brown just doesn’t need this.

His threats of retirement flew with little provocation. He’s openly clashed with upper management and with his own teammates. Is he melodramatic? Entitled? Or does he just not care as much for the game as we’ve expected him to?

We see world class talent and find it inconceivable that he could simply not have a passion for the game. But from what Brown has given us, it’s a reasonable assumption. Passion for the game can manifest as the same emotional responses he’s shown on the field; passion for the game, however, rarely extends to off-field antics that put team success in jeopardy.

And now, that off-field persona has manifested in a bombshell report that rippled through the NFL just three days after he signed with the Patriots: Brown was accused of raping a woman who worked as his former trainer. He’d reportedly been in settlement talks with her since April, and, with his refusal to settle, the case will advance to court.

Since then, a second woman has come forward, an artist alleging that Brown came onto her when she was working on a mural of him in his own home. Brown, she says, approached her naked, with only a small hand towel covering his genitals. She continued painting. Nothing happened. But one allegation is concerning. Two could be the beginning of a pattern.

It’s not the first time a professional athlete has been accused of violence against women. It won’t be the last. But it’s been glossed over in the sea of insanity that Brown has brought forth into the NFL – brushed off as just another strike against a man who’s shown himself to be a loose cannon. They remain allegations at this point, but should the women’s accounts be confirmed, these instances cannot be excused as another in a long timeline of foolish, eccentric, even outrageous behavior.

Has his behavior in the past two years defined insanity? Certainly. But can that be allowed to overshadow that these two accusations are in an entirely new realm of unacceptable actions?

Amidst these allegations, AB will continue to maintain his innocence, and will continue to play in the NFL, breaking in his brand-new Patriots jersey in the weeks to come. His debut was utterly ordinary, a New England special: the utter massacre of the Dolphins, ending 43-0, felt almost normal. For a moment, watching Brown receiving passes from Brady, our disbelief could be suspended. This was a talented wide receiver flourishing under the watchful eye of an experienced veteran and talented quarterback. For a moment, Antonio Brown existed as the player, not as the name attached; not as the Oakland traitor, not as the Steelers nightmare. Not as the alleged rapist.

But only for a moment. Brown has thrived on his new, villainous reputation; his “Ain’t no more games” video was, in a way, an emulation of LeBron in that black mask on the Miami Heat – of danger, rebellion, anger. Brown has a reputation now. He’s not shying from it. But that reputation cannot be confined to the gridiron now. He’s made it personal. Perhaps, before, we could ignore some of his ludicrous behavior, do as the Patriots are doing, focus on the talent of the player and not the man himself who bears the team’s name on his chest.  These allegations have made that impossible.

Insane antics are one thing. Villainy is another entirely.

And Antonio Brown is toeing a fine line.