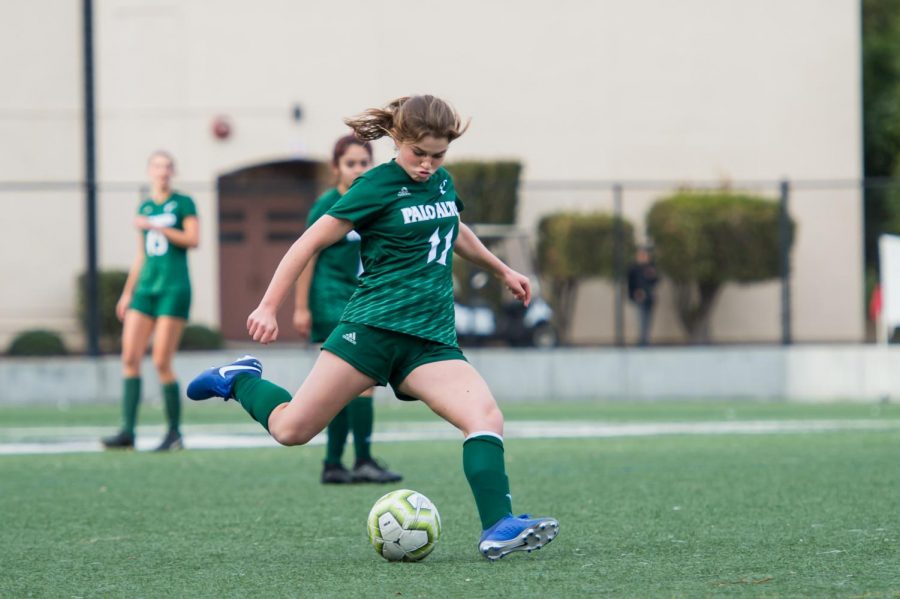 The Paly Varsity Girls Soccer team defeated Saratoga on Wednesday by a score of 3-0, thanks to the heroics of star sophomore Mariana Kessinger. The game started off with a bang, as Kessinger scored in the first few minutes to give her team an immediate lead.

Throughout the first half, the ball was mostly on Saratoga’s side of the field, with the Vikings finding a few shots on goal, but only one score. In the second half, substitutes seemed to energize the team and find Kessinger a few more shots on goal.

She would finish the game with all three goals for the Vikings, the last of which was surrounded in controversy. Well into the second half, the ball rolled out of bounds, and each team thought that the ball was theirs.

The Vikings got to the ball first and inbounded it, while the Saratoga players stared at the ref in search of a ruling. By the time they realized that Kessinger was in position to score, it was too late. She hit the open shot and the nail in the coffin for the bewildered Saratoga team.

The consensus among the players was that this game was something to build off of, since their season hasn’t begun the way many thought it would.

“We’ve had a pretty rocky start to our season,” said Frida Rivera (‘20). “So coming out with a three-zero win was a step in the right direction.”

As the season progresses, the Vikings will likely gain more cohesion and fluidity, which many believe will put an end to their struggles.

“It was a good game to practice our flow and chemistry as a team,” said Hailey Hwang (‘21). She also noted that they “still have a lot of work to do.”