The Women Behind the Madness – The Viking Magazine

The Women Behind the Madness

Each year, the National Collegiate Athletic Association men’s Division I basketball tournament dominates the airwaves from mid-March through the first week of April. In the weeks leading up to it, avid basketball fans watch and cheer on their favorite teams as they fight to gain a spot in the tournament.

Simultaneously, millions of people fill out their own brackets, in an attempt to predict the champions. Just last year, ESPN’s Tournament Challenge had over seven million registered participants.

ThinkProgress conducted a study from March 27th to April 2nd (during March Madness 2017), where they checked both the NCAA and ESPN website three times a day in order to gather data about the coverage of the men’s and women’s tournaments.

In addition to the NCAA tournament, the NCAA men’s basketball regular season is wildly popular.

At the beginning of the 2018-19 season, many of the major teams played in invitationals in places like Hawaii and the Bahamas. During that season, the Maui Jim Invitational in Hawaii garnered almost nine million viewers for the tournament, according to Maui Now.

In recent years, Oregon star Sabrina Ionescu has risen to stardom for her all-around talent and electric play. On February 24th of this year, she became the first player in Division I history on the men’s or women’s side to reach career totals of 2,000 points, 1,000 assists and 1,000 rebounds.

Having an extremely talented and energetic player like Ionescu helps a lot with publicity for the women’s game, but the problem is she seems to be the only star. As of April 15th, six of the first 10 articles and videos on the ESPNW page feature Ionescu.

The lack of coverage for the women’s game results in other star athletes being virtually unheard of outside the realm of avid women’s basketball fans. This season, Ionescu received unanimous first-place votes on the All-American team. 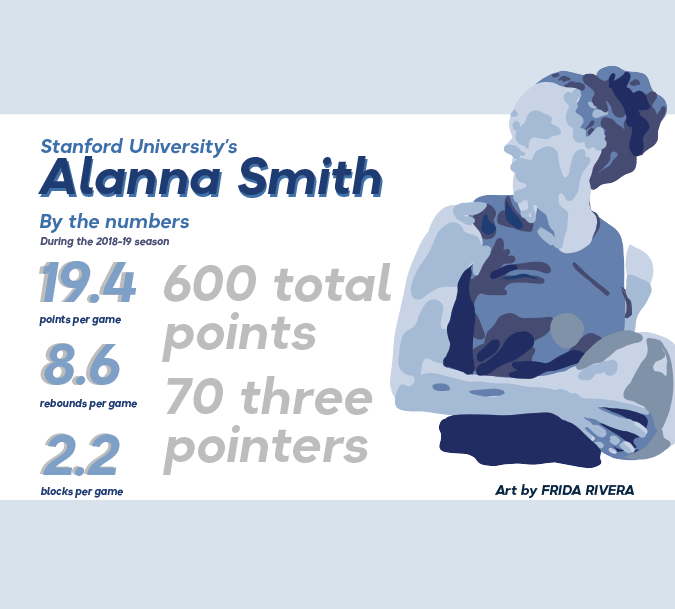 Second on that list was Kentucky’s star sophomore Rhyne Howard, who was mentioned on ESPNW 161 times compared to 3,820 times for Ionescu. In only her second season in the NCAA, Howard recorded 23.4 points per game, which ranked second nationally.

Her season was highlighted by the time she scored 25 points in five straight games, three of which were against top-25 teams. During that stretch, in a game against South Carolina, arguably the favorite to win the national championship and one of the top scoring defenses in the nation, Howard put up 28 points, which was tied for the most South Carolina let up to an individual opponent that season.

Another example was Stanford’s Alanna Smith. In the 2018-19 season, Smith earned Second-team All-American status and was dubbed one of the top 10 players in the country.

Unfortunately, female players like Smith never get as much publicity as their male counterparts. During Smith’s historic season, Stanford only appeared on national television twice – and one of those times was the Pac-12 championship game.”

Smith had a historic season where she averaged 19.4 points per game, 8.6 rebounds, 2.2 blocks and shot 51.4% from the field. Her senior season quite literally put her in her own category.

Smith was the first women’s player in 20 years to compile a season with 70 three-pointers, 70 blocks, and 600 points. In fact, in the men’s game, that feat has only been accomplished once by Shane Battier of Duke in 2000-01.

You’d think that all of these stats point to someone with a legendary status. Unfortunately, female players like Smith never get as much publicity as their male counterparts. During Smith’s historic season, Stanford only appeared on national television twice – and one of those times was the Pac-12 championship game.

Comparatively, men’s teams like North Carolina, Duke, and Kentucky cumulatively had 78.5% of their schedule appear on national television despite playing teams like Boston College, which didn’t even crack the top 100 in ESPN’s Basketball Power Index rankings.

Every single game in the men’s tournament gets national television coverage, even the First Four, which pits the teams that barely made the tournament against each other for a spot in a game they’ll likely lose to a higher-seeded team. With record deals from TBS, TruTV, TNT, and CBS, the men’s tournament always has plenty of channels to choose from to cover their games.

On the other hand, for the first few rounds of the women’s tournament, the games have to compete with one another for coverage on one channel, ESPN2. Generally, in the first round, there will be 3 or 4 games in one time slot.

If you want to see your team play in the NCAA tournament, you better hope the producers deem your team’s game interesting. Or you can hope they advance to the Sweet 16, where your favorite team will finally get their own time slot.

In addition to the college level, the professional level experiences a similar level of disparity. The WNBA will have seven games on ABC or ESPN this upcoming season, while the NBA has weekly games on TNT, ABC, and ESPN. In the 2019-20 NBA season that was cut short, 160 games were slated to be televised nationally during the regular season alone. It’s simply challenging to watch women’s basketball, even as an avid supporter. With better representation, the fanbase for women’s basketball could grow in size exponentially.

If you want to see your team play in the NCAA tournament, you better hope the producers deem your team’s game interesting. Or you can hope they advance to the Sweet 16, where your favorite team will finally get their own time slot. ”

It takes a dedicated fan to watch the women’s March Madness games when there are three or four games going on at once. It’s not that people refuse to watch women’s basketball, the problem is that they can’t — or at least not very easily. If women’s games had more air-time representation, more publicity and more recognition from the NCAA, their fan base could grow.

The Women Behind the Madness